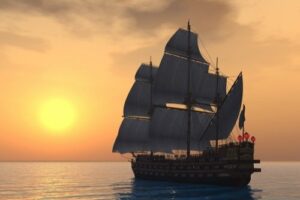 It’s the 16th century you’re sailing through the harsh elements of the Atlantic the sea spray blasting through the air the land in the horizon getting closer and closer. To top it all off is a refreshingly sweet minty Mojito. Let the adventure begin.

A mojito is one of the world’s most popular cocktails. The ingredients rum, lime, mint, and sugar can all be found on the island of Cuba. It’s place of origin. Because the rum was harder to acquire it was originally made with aguardiente. Aguardiente was an unrefined version of rum made from sugar cane.

Who Made the Mojito?

But who made the drink? The story goes that an English sea captain by the name of Sir Francis Drake invented the Mojito. Although it wasn’t called a mojito at the time, it was called “El Draque.” His version was also made with brandy instead of the rum or aguardiente. In our modern era, unaged white rum is the traditional liquor that makes an authentic Mojito.

Using a muddler is required to extract the revitalizing flavors from the mint leaf in a Mojito. While it requires extra effort it is well worth it. The mixing of lime, mint, and ice, yields a drink perfect for the hot summer. But it can also be enjoyed anytime of the year! Next is the recipe! 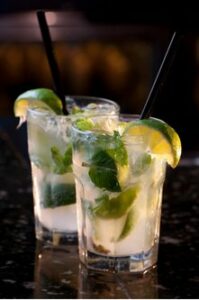 A spritz of club soda on top

Garnish with a mint sprig and lime wheel

Steps on How to Make a Mojito

Also check out our Behind the Bar Series on the tin on tin shaker, Boston Shaker, and Cobbler Shaker!

Now that you have the knowledge to create a Mojito get certified to bartend with Serving Alcohol!