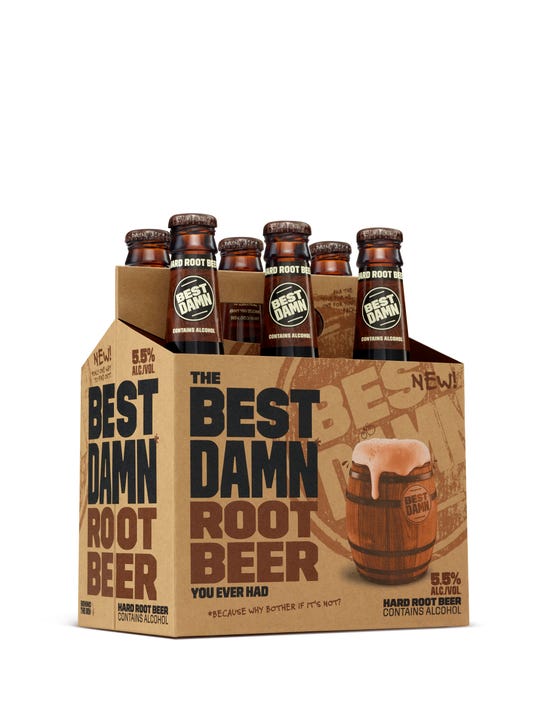 Anheuser-Busch has a new brew to float: A boozy root beer.

Best Damn Root Beer, hitting stores and taps Monday nationwide, is the first beer from the mega-brewer’s new unit, Best Damn Brewing Co. The new beverage, a sweet ale aged on vanilla beans will weigh in at 5.5% alcohol by volume — that compares to 5% for traditional Budweiser. It’s being positioned as a premium-priced product available in bottles, cans and on tap.
“We like to say this is an easy-drinking hard root beer,” said Kathy Sattler, brand director for Best Damn Brewing Co. and a 20-year veteran who has served as marketing director on global Budweiser and Corona brands. “It smells, it looks and it tastes like the root beer flavor you know and love, but in an adult version.”
As part of the launch, Anheuser-Busch will have Best Damn Root Beer available in bottle, cans and on draft nationwide. Some restaurants and bars will also offer root beer floats with the new beer served in special 20-oz mugs.

Anheuser-Busch’s Best Damn Brewing division has been working on the recipe since 2014. “We are seeing more and more consumers gravitate to different styles and different palates wanting things that are not just the traditional beer taste,” said Rashmi Patel, an Anheuser-Busch vice president within the brewers’ new “Share of Throat” team aimed at creating new alcoholic drinks beyond traditional beers.
Boozy root beers have been a hit this year, with Not Your Father’s Root Beer from Small Town Brewery of Wauconda, Ill., and Coney Island Hard Root Beer out of Brooklyn’s Coney Island Brewing, both infiltrating shelves across the nation.
Not Your Father’s Root Beer (5.9% ABV), which is distributed by Pabst Brewing, was launched nationally this summer;  Pabst CEO Eugene Kashper is also part of a group that owns an interest in the brands.  So far this year, consumers have spent about $111 million on hard root beers at retail outlets and convenience stores, according to IRI, a Chicago-based market research firm that tracks sales at supermarkets and other retail outlets.
Small Town’s Not Your Father’s Root Beer commands 80% of sales — and is the No. 3 ranked craft beer brand, according to IRI — while Coney Island Hard Root Beer has 18%, IRI says. “Alcoholic root beers quickly emerged to have a significant impact on beer category sales this year,” said IRI’s Dan Wandel. “Based upon the success this year of Not Your Father’s Root Beer and Coney Island Hard Root Beer and the significant number of additional hard soda brands expected in 2016, I would expect to see sales for hard sodas more than double in 2016.”
Also hitting during the summer was Coney Island Hard Root Beer (5.8% ABV), available nationally from Coney Island Brewing, which is part of Samuel Adams’ parent company Boston Beer. Just this month, Coney Island Brewing added two new soda-inspired beers, Hard Ginger Ale and Hard Orange Cream Ale to roster.
“We launched our Hard Root Beer this summer, and the response was unprecedented,” said Coney Island Brewing’s operations manager Chris Adams. “We knew we would appeal to the tastes of craft beer drinkers if, like with Hard Root Beer, we created hard craft sodas that are both delicious and nostalgic.”
Small Town also has a Not Your Father’s Ginger Ale scheduled to hit 40 states in February.
“I just see this as another product that companies are offering in an attempt to quench the thirst of consumers who are trying new products and trying different styles in a lot of different areas,” said Chris Furnari, business writer for  Brewbound.com. “Some folks want a more hoppy bitter offering, some want a sugary sweet offering.” 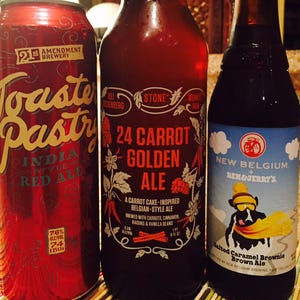 For now, Anheuser-Busch is brewing the Best Damn Root Beer at its Los Angeles and Cartersville, Ga., breweries. It is likely expand its lineup, too. “We want to make sure that consumers who are experimenting, when they don’t want to have one of our core beers that they were coming to our portfolio,” Patel said.
SABMiller, which is the process of trying to merge with A-B InBev, also has hard soda drinks in the works, Furnari said. So the category could be developing into another arena in which Big Beer brands are competing with craft breweries. Craft beer’s share of the $32.6-billion beer industry  is expected to increase from 7.5% in 2010 to 15% this year, according to research firm IBISWorld.
“The other thing we’re curious to see is whether there going to be a craft version of this, something really high-end (or) organic,” Furnari said. “It’s certainly an evolving category. We don’t know where it’s going or how long it’s going to last.”